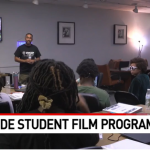 Lights, camera, action has taken on a new meaning for 21 high schoolers from the eastside.

They can now call themselves filmmakers thanks to Alamo City Studios who introduced them to the motion picture industry.

Ask 15-year-old sophomore Todjai Dotson who was skeptical at first.

“Everybody doesn’t like the same things and sometimes I get afraid of judgment or people thinking it’s weird to do film,” says the Sam Houston High School student.

What’s it like to create a short film in the same place where big screen favorites like Miss Congeniality, 8 Seconds and Selena were filmed?

Alamo City Studios CEO Kerry Valderrama says the Eastside Youth Content Creators Program was made to give students the perspective of what it’s like to work for a big-time studio.

“The concept was always bringing them from script to screen and having them create their story, whatever it was and then guiding them through the process on all the ins and outs,” says Valderama. “How the contents are shot, how it’s edited, how it’s marketed and then ultimately for the showcase.”

The students were split into groups.

Each group directed, produced, acted in and created promotional material for six different short films.Everything from fantasy to comedy will be debuted this weekend at a premier event for the students.Valderrama says this is just the beginning for them.

Some have already taken film internships and one film was just approved to appear at a film festival.

“We told the students that after the showcase, it does not end there,” says Valderrama. “We are going to we want to help nurture you, not only for PA jobs, other film festivals, other showcases, but really being able to nurture them within the film community here in San Antonio.”

Todjai says she has gotten over her initial fear of what others would think. The program has given her the courage to take her talents further than what she had imagined.

“We had a lot of mentors and a lot of people that are big in the industry come talk to us,” she says. “A lot of them told us just to be yourself, it’s okay to want to do this. Find yourself, also find what you want to do, find what you can do, what you’re good at.”