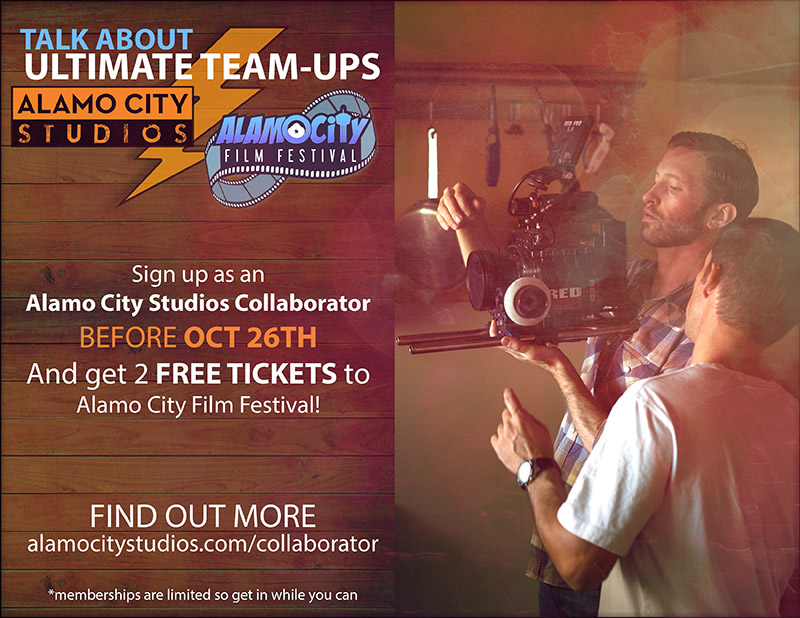 Talk about the ULTIMATE TEAM-UP

Alamo City Studios and Alamo City Festival are teaming up to bring you the craziest deal on planet Earth, Krypton, Asgard, Narnia or wherever you hail from.  No really.  It’s like a REALLY good deal.  So good, I can’t believe I am even typing this.

THE SKINNY:
Sign up as an ACS Collaborator before October 26th and get two 1-DAY PASSES to Alamo City Film Festival.  FREE.  A $50 VALUE!!
These passes are good for either Friday or Saturday (October 28-29) for all screenings at the Lila Cockrell Theater and the Cultural Institute of Mexico.  That is TWO 1-DAY Passes (so you can bring your hot date).

HOW THIS WORKS:
1.  Sign up as an ACS Collaborator.
2.  We will email you a receipt.
3.  Print and bring your receipt to the festival checkin at the address below, Friday or Saturday and we will issue you your pass!

ABOUT ALAMO CITY FILM FESTIVAL:
Alamo City Film Festival is an international celebration of film; showcasing features, documentaries, and short films from around the world, attracting a high pedigree of celebrities and filmmakers that will naturally contribute to the Texas State’s already flourishing film industry. In conjunction with Alamo City Comic Con, highlights of the festival include special guest celebrities, filmmaker discussions, and networking opportunities at the Lila Cockrell Theatre in Downtown San Antonio, Texas, a short walk from the Alamo and Riverwalk. Awards will be given to the Best Narrative, Best Documentary, Best Short Film, including the Grand Jury award.

A young woman must save herself and her friends from an ancient evil that stalks its victims through the real-life phenomenon of sleep paralysis. Starring Jesse Bradford (Swim Fan, Bring It On), Jocelin Donahue (Insidious Chapter 2, StartUp), Jesse Borrego (American Crime, Blood In Blood Out, Con Air, Dexter), Lori Petty (Orange Is The New Black, Point Break, Tank Girl)
Directed by Phillip Guzman (Regional Premiere)

When America’s fascination with living forever creates a viral outbreak, the Earth’s population starts to reduce in stages. After the first four are completed, CHILDREN and TEENS are the only humans left in an apocalyptic world where they must not only fend for themselves against the virus, but against one another. Starring Noel Coet (Longmire, CSI), Jack McGuinness (The Divide, Then), Christine Lekas (Rush Hour) Jason Scarbrough (Now Hiring, Fuse)
Directed by Buddy Calvo (World Premiere)

Zayane is 75 years old. Ever since her arrival in France, she has never left her neighborhood. One day, Zayane receives a letter announcing the death of a man she once knew, many years ago in Algeria. She suddenly decides, to fetch a mysterious box the deceased left for her. Meanwhile, during her absence, Zayane’s eleven children reunite in her apartment and discover little by little a part of their mother’s life they never knew about before.
DirectedbyFejriaDeliba (USAPremiere)

With a single abortion clinic remaining in the state of Mississippi, the city of Jackson has become ground zero in the nation’s battle over reproductive health-care.
Directed by Michael Matheson Miller (San Antonio Premiere)

The story of the reality of thousands of Latin American women who are traveling alone in Europe and the consequences of this transnational relationship arising from the distance with their children.
Directed by Oskar Tejedor (TexasPremiere)

A documentary alleging that the CDC, the government agency charged with protecting the health of American citizens, destroyed data on their 2004 study that showed a link between the MMR vaccine and autism.
Directed by Andrew Wakefield

For more information, film inquiries, or 2016 press credentials, please visit our website at

In a past life, I am an award winning director and cinematographer. In my current life, I am Director of Web Relations for Alamo City Studios and The San Antonio Film Society.
Lets Get This Party Started
Casting Call for Austin, Texas Short Film ‘The Fade Away’